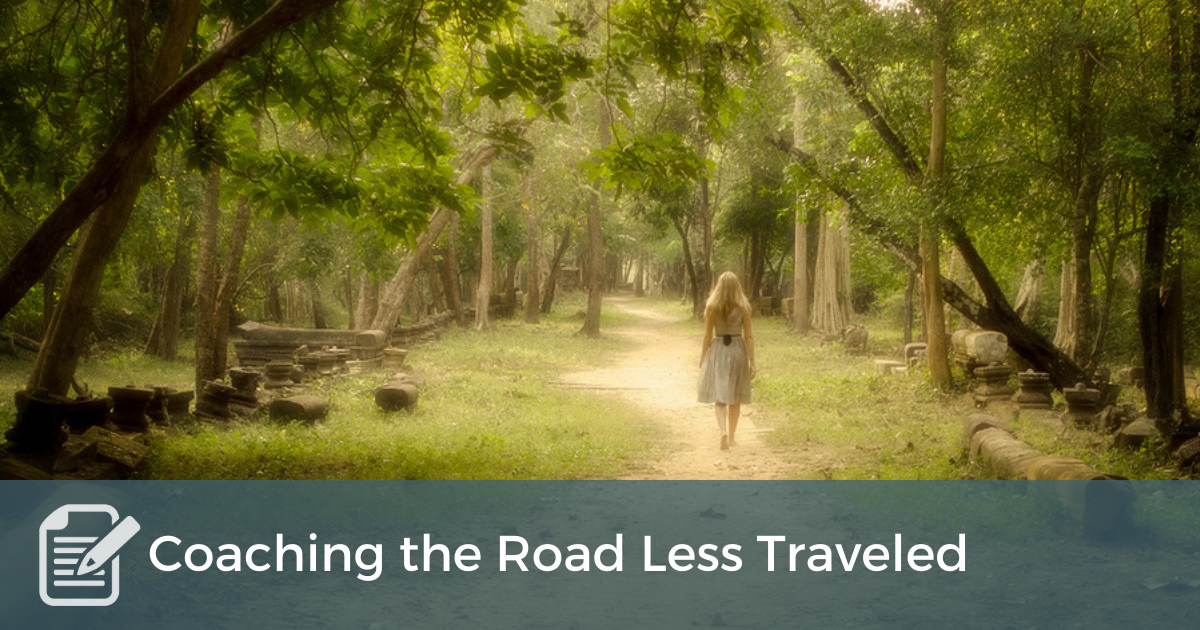 “Two roads diverged in a wood, and I – I took the one less traveled by, and that has made all the difference.”

It is a beautiful sentiment. It is romantic. It promises glory and depth and fulfillment. People who take this road equally inspire us and make us nervous. We are never impressed with the obituary that read, “She never took any chances.”

At the same time, we need to consider the words of another philosopher of our time. Kid President speaks of the consequences of such journeys such as Frost’s:

There is no way to make the less traveled road safe. It will hurt, but is there a way we can take that path with at least some promise that it won’t lead us to a wrecked life, as sometimes it does.

I recently read about two pastors who both chose less traveled roads about twenty to thirty years ago and recently ended their journeys in unexpected places.

One man, Joshua Harris, was a bright, conscientious, home-schooled kid who as he entered adulthood wanted to glorify God in how he courted a woman to be his wife. He wanted his courtship to be pure and holy. So he made a less traveled declaration. Rather than just promising chastity before marriage, he would also promise not to kiss, hold hands, be alone with a woman, or even create too much intimacy through conversation. He wrote his manifesto in what became a popular book, I Kissed Dating Goodbye. Thousands of people embraced this concept.

Another man, Craig Gross, was a youth pastor who found many of his students struggling with impurity outside of dating relationships. They were addicted to porn. He and a friend decided to start a ministry to put an internet barrier between teenagers and pornography, but they also took a road less traveled. They began reaching out to the producers of pornography — directors, actors, and videographers. They hoped to appear like Jesus (Luke 7:38), comfortable with people who were enmeshed in the seedier side of humanity and embracing them as people, even friends, rather than criminals. Many were skeptical about this approach.

At the end of this road, Harris announced that he and his wife were getting divorced and further, he was renouncing his faith in Jesus. Harris is starting his life over, looking at new paths to take, regretful of his less traveled choice, and regretful that many who followed him suffered as well.

Two men, both idealistic lovers of Jesus, good intentioned, wanting to take a road less traveled, ended up in quite different places. One man full of regrets. One man ready to take another less traveled path.

How can we avoid a road less traveled taking us to where we don’t want to go?

Let me suggest three areas where coaches can help with this question.

So in a safe environment, where we promise to hold a client’s beliefs and values with respect, we can challenge the client to build a fuller understanding of their beliefs.

How true is this belief?

When would this belief be invalid?

How could this belief cause unintended damage?

If everyone believed this, what would be the consequences?

How could you state this belief in way that is more true?

It isn’t a coach’s job to judge a person’s belief, but we can challenge the belief so that the belief doesn’t derail them on their journey.

When the coach hears of a less traveled path, the coach should press for details on the desired destination.

I was coaching a client who wanted to develop a timeline for her project. As I listened, I noticed she had strong beliefs that drove the project but lacked clarity on how the project should proceed. I asked her to describe the finished project in some detail but instead she started to sell me on the core beliefs. I called her on it and encouraged her to stop selling the core beliefs and instead describe the finished project as detailed as possible. A clear picture of the future is a great guide for mapping out the journey.

A less traveled path invites ongoing learning. There is less known about this path. A less traveled path is likely to give us insight into ourselves. Both Harris and Gross were charging hard into largely unexplored territory. Harris in particular did not seem to learn much about himself until much further down the road. He was thrust into a position to give answers to those in the purity movement rather than to foster curiosity about the movement itself.

What are you learning about yourself through this process?

What has been the most surprising discovery about this issue?

Where are some areas of concern for you on this journey?

The International Coach Federation (ICF) describes designing actions as both creating some next steps to take and creating a process for ongoing learning. A much safer environment is created for the traveler when curiosity and learning are built into the process.

I applaud the audacity of both men to take a road less traveled. I celebrate with Gross the ability to turn over his ministry to a couple who have been transformed by his ministry, and I find myself nervous about his new endeavor. I grieve with Harris over the loss of his relationships with his wife and with Jesus. These losses are always drenched in pain and question the heart of who we are as people, our value and worth. I pray that the failure of this experience won’t stop him from taking another less traveled road that will lead him to somewhere that gives him life.

As coaches, we are in a unique position to help people who are considering, taking, or nearing the end of a less traveled road. We can help them expand their thinking, firm up their beliefs, and learn how to have a healthy curiosity. And perhaps this will allow the less traveled road to make all the difference.