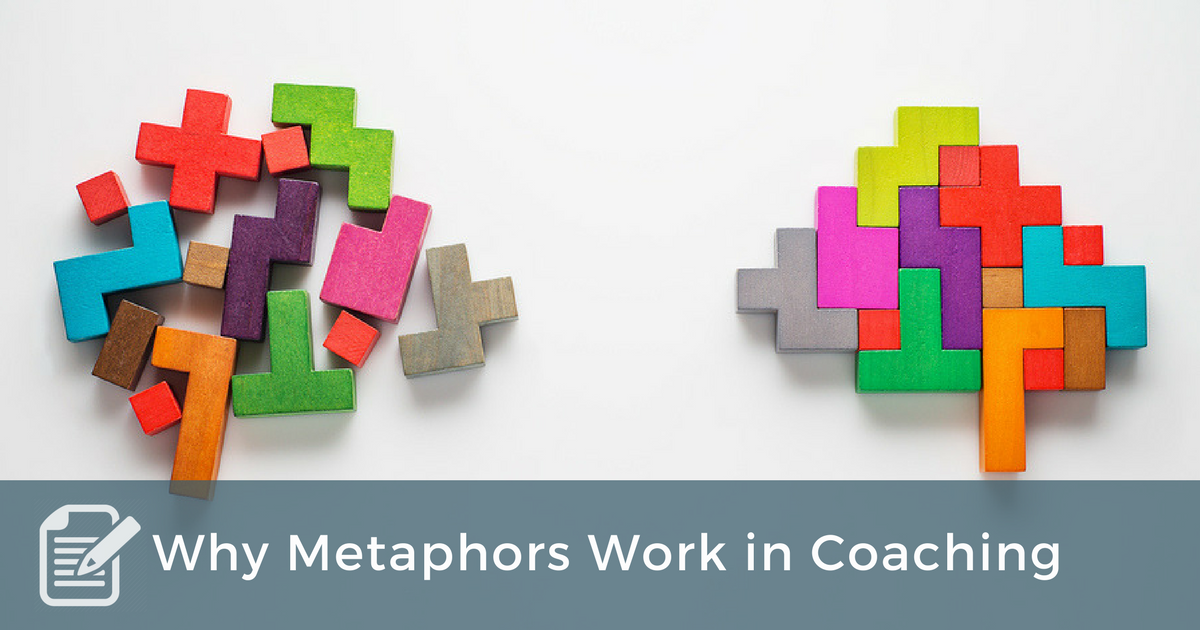 Coaches are communicators.  We specialize in effective communication in order to draw out what’s inside our client’s head, straighten out their tangled thought noodles, and clarify the fuzzy pictures of what’s possible.  And one of the most effective ways to communicate well is the use of metaphors – a figure of speech that describes an object or action in a way that is not literally true but helps explain an idea or makes a comparison.  As a coach, you don’t literally draw out what’s inside your client’s head – that would be creepy and illegal.  And your client’s thoughts are not literally noodles or overly pixelated pictures.  While metaphors are not literally true, the use of them in our communication is powerful.  In coaching, metaphors work for three reasons.

First, metaphors can simplify complex ideas.  My friend and coaching colleague Bill Copper is fond of using a metaphor to describe how coaching works by creating ownership with the client.  He says, “Nobody washes a rental car.”   The picture of refusing the car wash when fueling up your rental car before turning it in at the airport is simple, easy to understand, and gets you thinking.  On the other hand, the reasons why coaching clients are motivated and accountable for the ideas they generate (versus the ideas handed to them by someone else) is kind of complicated.  While it’s not rocket science, it is brain science.  While we could unpack all the reasons behind this truth and explain the truth with long, descriptive paragraphs, doing so would take a lot of time and would be easy to misunderstand.  It’s easy to get lost in long, complicated, and complex descriptions.  It’s not easy to get lost in a metaphor.  Come to think of it, “getting lost” is another metaphor.  They’re everywhere!

Second, metaphors can familiarize the unknown.  Some things are tough to understand not because they are complicated, but because they are unknown to us.  When a client moves forward in life, her progress is going to take her into unfamiliar territory, and a metaphor can shed light on the unknown.

For example, I once had a client who was a business owner with the Midas touch.  He succeeded at every step – until he didn’t.  When his business took a very hard hit, he had no idea how to respond. While he was familiar with the challenges that accompany growth, he was a stranger to the challenges that come from losing business.  The client was also an amateur pilot, so we compared his business circumstances to a plane that was plummeting towards the earth.  The Denzel Washington movie Flight had recently come out, so that helped with the metaphor.  I asked him what he’d do if his plane took a nosedive.  Honestly, his response included some aeronautical terminology that I didn’t really understand – something about speed, lift, and gravity.  The comparison helped him realize that businesses also faced a type of gravity that constantly and naturally pulls them down.  The force of gravity is strong, but it can be overcome with the right design, enough speed, and a well-trained pilot.  Eventually he said that the worst thing a pilot can do is freak out.  Then, after a long pause, he said that he was kind of freaking out.  So the conversation turned to how he could stay calm in order to be the best pilot possible.  The familiar concept tapped into his resources, which he then leveraged to deal with an unknown reality.  That’s the power of metaphors in coaching.

Third, metaphors can reduce fear.  When a person faces complicated and/or unknown circumstances, the natural response is fear.  This emotional reaction is designed to keep humans alive by encouraging us to avoid potentially dangerous situations.  But avoiding scary stuff is not always an option.  What’s worse, when gripped by a negative emotion such as fear, the human brain goes into shut down mode. The body’s fight or flight response pumps blood (and the oxygen it carries) to our big muscles so we can run or struggle, but this reallocation of blood also depletes the brain of the oxygen it needs to be creative and resourceful.  In other words, fear makes us dumb.  By simplifying the complex and familiarizing the unknown, metaphors reduce fear and increase the brain’s ability to function at full capacity.

So take a look at your own use of metaphors.  How are you doing?  To what extent do metaphors come naturally to you?  Think back to a recent coaching conversation and consider what metaphors might have been helpful.  If you’d like some immediate application, try coming up with a metaphor to describe your use of metaphors. As you grow in your ability to use metaphors well, the value of your coaching will inflate like a birthday balloon.

2 thoughts on “Why Metaphors Work in Coaching”