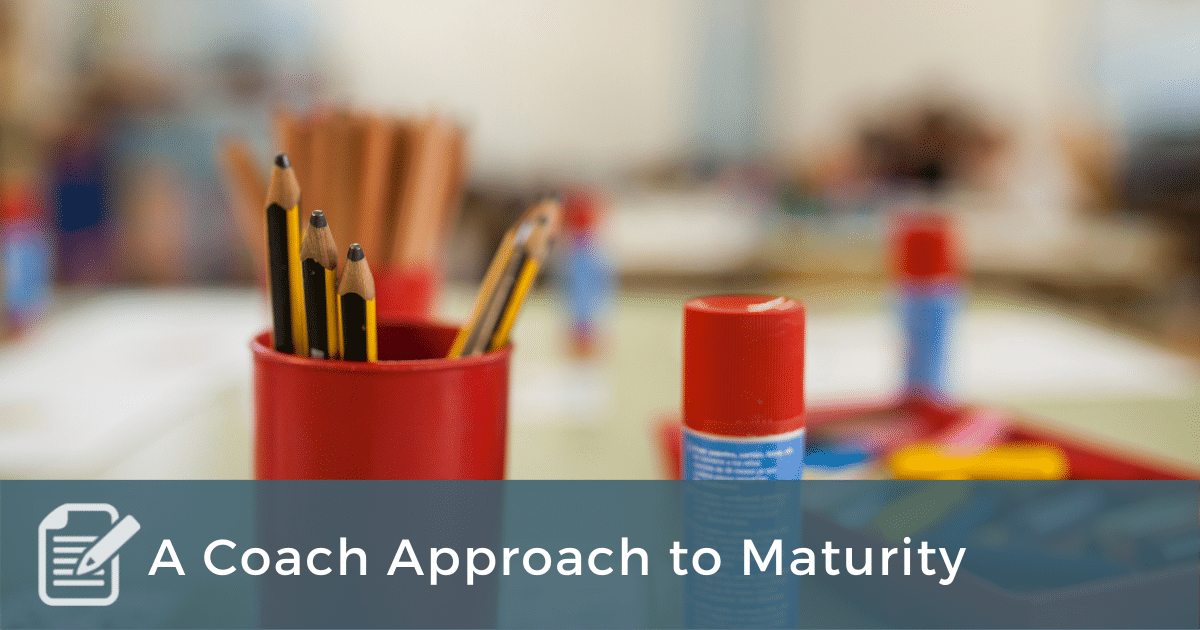 To function well on a team takes maturity. The Apostle Paul agrees:

He handed out gifts of apostle, prophet, evangelist, and pastor-teacher to train Christ’s followers in skilled servant work, working within Christ’s body, the church, until we’re all moving rhythmically and easily with each other, efficient and graceful in response to God’s Son, fully mature adults, fully developed within and without, fully alive like Christ. – Ephesians 4:12-13 (The Message)

At a recent leadership development gathering, I gave participants the Core Values Index assessment to help them understand how they can best contribute to their teams. One participant, Lily, noted that she purposely answered the assessment questions in a way so as not to come out so strong. Her desire was to show up less. A better shift would be for her to show up more mature.

It is not that Lily is immature. She is a strong, passionate leader, and when Lily joins a team, she can tend to overpower everyone else. As Lily matures, she will draw people into the light of her presence rather than pressing them into the dark. When her presence is open and inviting, she will draw others out through active listening and the appropriate assignment of responsibility.

Jennifer Garner once said about her ex-husband Ben Affleck:

I didn’t marry the big fat movie star; I married him … He’s the love of my life. What am I going to do about that? He’s the most brilliant person in any room, the most charismatic, the most generous. He’s just a complicated guy. I always say, ‘When his sun shines on you, you feel it.’ But when the sun is shining elsewhere, it’s cold. He can cast quite a shadow.

Lily has a powerful presence, and she knows it. She came to our leadership retreat thinking she needed to tone it down. I think she needs to tone it up.

At the gathering, we did an exercise where we split the participants into four teams and asked them to work on a project together. Each team needed to build a miniature potted plant out of sticks, glue, and ribbon. Each member had an imposed limitation: one member was blindfolded, another could use only one arm, the third person was given vague instructions, the fourth person was given a picture of the finished project but then told to show it to no one and was forbidden to talk. The final team member was assigned to be the leader and then was forbidden to help.

I was on Lily’s team. I was shown the picture and then forbidden to talk. Ouch. Lily had it worse. She was blindfolded, and it was a bit like pulling the curtain on a sun. Lily thought she was useless.

A more mature Lily might have realized that she wasn’t limited at all. She was the sun. She could pull us all into her orbit even if she was unable to physically participate. Without trying, she increased our team communication. To make up for her loss of sight, she asked a lot of questions. The team began to talk through the project in a much clearer way. Discouragement came quickly as our limitations made us each struggle. Lily was the voice of encouragement. She told us to keep moving forward and to even start over if needed.

The mature team member silences their internal voice to fully hear what others are saying. The active listener hears not only what is being said, but hears how it is said, and even hears what is not said. They bring a fullness to others’ communication.

The immature partner dampens the others’ voices so that their own voice takes on more authority. They often assign a negative meaning to what others are saying, so that inevitably, the others will stop speaking.

In our craft project, Lily’s eyes were covered but not her ears. At the midpoint of our work, we had to randomly trade one member for the member of another team. We replaced a woman for a man. Lily was not fully listening. She kept referring to the new team member as “one of the girls”. She had not heard him.

Active listening creates an environment of exploration. Instead of the struggle which tore us apart, we could have been drawn together by learning more about each other. Who was good at gluing sticks to ribbons? It was not me. I was the worst, but no one knew it because I was not allowed to talk.

Good solutions come from the full participation of team, but someone has to be listening.

The second way might seem more mature, but it is not. An immature person might take all the responsibility. They cannot say no to anything. This never helps, and it always hurts.

As our team project neared completion, I felt the responsibility of our success landing on me. I had two reasons. One, I had seen a picture of the completed project. No one had a clearer view than me. Two, I was the only one on the team with two hands. We traded our vague instruction person for another one-handed person.

I pulled the craft in front of me and attempted to finish our project gluing sticks to ribbon, and then trying to pull the arrangement into the shape of a small pot. My sense of responsibility was immaturity. No one on our team was worse with glue and sticks and ribbon.

The failure of our team was not that we made an eye-sore of a craft; it was that we failed to create an excellent team. We leaned into our immaturity, exasperated by the imposed limitations, rather than into our maturity. The limitations became our story.

The good news is that a team provides much more than we bring on our own. With a little mature exploration, we will likely find that everything we need is among us. Utilizing coaching skills as maturity, we can soon begin to create a mature team that can succeed at whatever they decide to do.