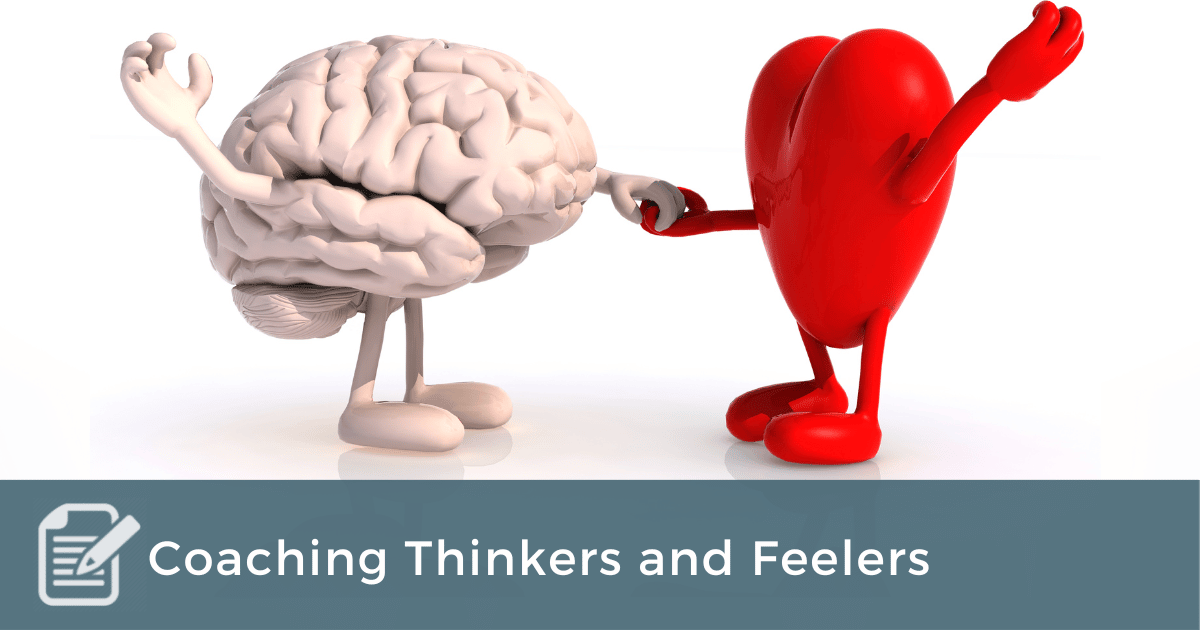 I’m going to go out on a limb here and say that every coaching conversation I’ve ever conducted has included the client making at least one decision.  Typically, the client makes far more than one decision per coaching session because a productive conversation is full of decisions: what to talk about, where to focus, which options to act on, how to proceed, what accountability needs to look like, etc.  Lots of decisions.

Thinkers are people who prefer to make decisions based primarily on objective logic and reasoning.  They tend to try to step away from an issue to see it as objectively as possible and to decide based on what will meet the criteria for a good outcome.  For example, Keith is the president of a small manufacturing company.  Recently he was faced with the decision of whom to promote to be the shop manager. He had two candidates, one of whom Keith had known for many years and considered a friend.  But this candidate also had some personal challenges that had kept him from being fully engaged.  Keith decided that he needed someone more reliable and available, so he went with the other candidate, even though doing so might create disappointment and resentment from his friend.  To Keith’s credit, there were no feelings of judgment or concern in the decision-making process.  Keith had zero negativity toward the candidate he passed over or fondness for the one he chose.  His was a calculated decision based solely on what Keith thought best for the company.  Keith’s cold logic was echoed by a town manager I talked with last year who declared, “I would fire my momma if that’s what was best for the town.”  At the extreme, this is how Thinkers process decision.

Feelers are people who prefer to make decisions based primarily on relationships and how the decision will impact others and promote/disturb harmony.  They take the feelings of others into account and also give strong consideration to their own feelings, especially their own values.  If Keith were a Feeler, he would have processed the promotion decision much differently.  He would have considered how he felt about each of the candidates, including his fondness or dislike toward either of them.  He would have also pondered how the promotion might affect each of the candidates and the team of guys in the shop.  More important than what was best for the company would have been which candidate best honored a value to Keith – perhaps tenure at the company.  As it was, Keith does not prefer to make decisions based on the Feeling preference, so he gave little attention to any of these factors.

Thinking and Feeling each has its downside.  Thinkers can overlook the impact a decision will have on those who will be affected but who are not as objective.  They can miss the ways people might respond emotionally to a decision and how a decision can affect group dynamics.  I recall once when a church leadership team made up entirely of Thinkers needed to trim the church budget.  They considered their biggest expense (staff), then looked at staff with relatively high salaries (those ministry staff who’d been there the longest), then considered whose responsibilities could be absorbed by other ministry staff.  They landed on a pastoral care minister who’d been with the church nearly twenty years.  He was in his early 60’s and was eligible for drawing Social Security.  By the numbers their decision made sense.  They failed to see how beloved the minister was, especially by the older members of the church who were the biggest givers.

Feelers can underestimate or fail to consider the facts of a situation unrelated to relationships.  In pursuit of their personal values, they can develop a blind spot for bottom line values such as revenue – values that are necessary for functioning, be it in a business, a church, or a household.  A strong preference for feeling can also cloud judgment concerning when to have difficult conversations.  At their worst, Feelers can be people pleasers who back away from conflict in the interest of maintaining a relationship.  I know many pastors who have opted to overlook a congregant’s extramarital affair (or similar issue) in order to avoid rocking the boat, hurting feelings, or disturbing harmony.

As coaches, we should approach client decision-making with a balance of Thinking and Feeling functions.  The balance doesn’t have to be a perfect 50/50 consideration of Thinking and Feeling, but healthy decisions do tend to rely on both functions to some degree.  Knowing which preference a client leads with is important since you will want their preference to be the starting point before shifting to consider the decision from the other function.  For example, when coaching Keith about promoting someone to shop manager, I invited him to process the decision from his logical, objective Thinking function first.  He has almost settled on the decision before I invited him to check himself against the Feeling way of deciding.  I asked him if he personally liked either of the candidates more than the other.  He said that didn’t have anything to do with it, but I reminded him that he (Keith) would have to work closely with whomever took the role of shop manager.  They would need trust and mutual respect for the person to make the most of the position.  I also invited him to consider how other people would respond to either of the choices.  Again, he said it wasn’t their decision, it was his.  I assured him that even though it was his decision, some of the data he might want to consider was how less objective, more feelings-based people would respond to either of the choices.  Once he reframed peoples’ emotional responses as “data,” he was able to consider these facts as part of the equation.

Before we leave the topic of Thinking and Feeling, it’s helpful to think beyond personality preferences when considering how people make decisions.  The field of moral psychology helpfully muddies the distinction between Thinking and Feeling.  The model of social intuitionism posits that humans make many decisions at the pre-rational (emotional or intuitive) level and then later look for rational explanations to justify their choice.  The rational explanation can pose as reasoning, but its real function is rationalizing.

Coaches will want to take the time to support clients in unpacking their decision-making process to ensure they are truly leveraging facts, criteria, and reason when making decisions and not simply justifying decisions they arrived at via beneath-the-surface intuition alone.

PrevPreviousDo You Need a Certification or a Credential?
NextCoaching Perceivers and JudgersNext