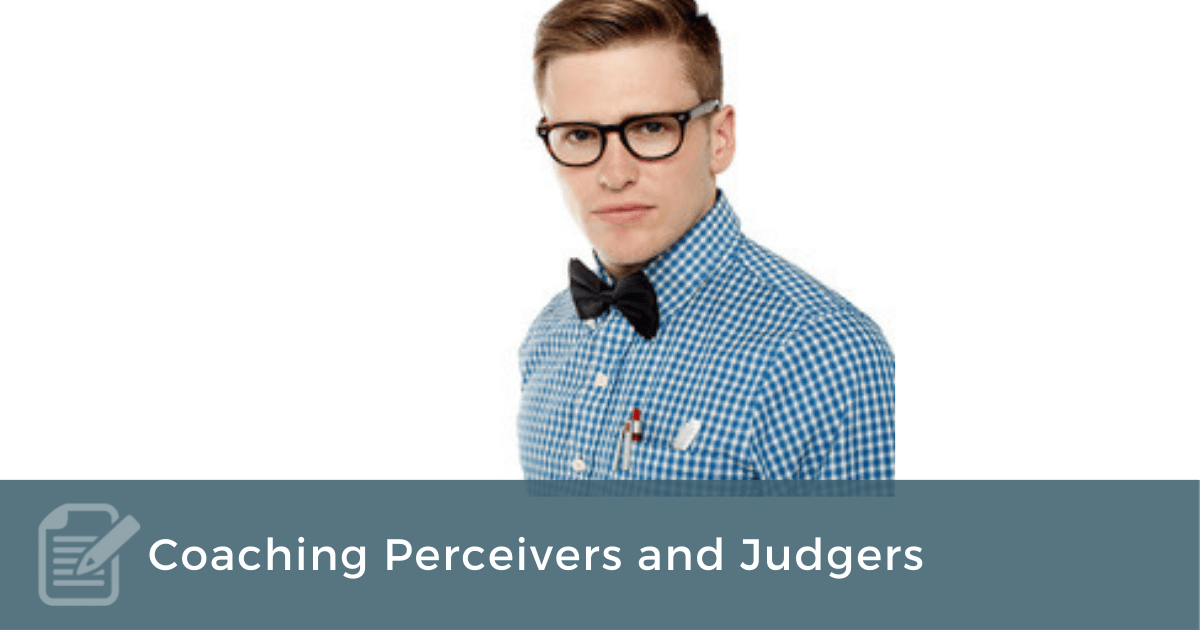 This is the fourth and final post related to using the Jungian personality framework in your coaching.  The framework has been popularized by assessments such as the Myers-Briggs Type Instrument (MBTI).  Jung posited that human personality can be understood as the interplay of three specific preferences:

Introvert/Extrovert describes where a person projects his or her preferred personality function.  Do they prefer the inner world of thoughts and ideas or the outer world of people and action?

Sensing/Intuition describes how a person prefers to take in new information.  Do they prefer and give more validity to that which is immediate and tangible, or do they prefer and trust concepts and big pictures?  This is your perceiving function.

Thinking/Feeling describes how a person prefers to make decisions.  Do they more strongly consider objective facts or do they put an emphasis on relationships and subjective experience? This is your judging function.

Jung called these final two preferences “functions” and the first one an “attitude.”  A function is something you do, while an attitude is the style with which you do it.  Later, the mother-daughter team of Myers and Briggs came along and added another attitude to describe which function a person preferred: judging or perceiving.  In short, the P/J preference deals with how a person engages his world.  Does he see the world as something to explore (perceiving) or as something to organize (judging)?

In my experience, this preference describes a great deal about any particular person.  One’s preference to either explore or organize shows up in a myriad of ways:

To put a real people example into this preference, let me contrast me and my wife.  I am an off-the-chart Perceiver and she is a solid Judger.  Early in our marriage we had conflict over Saturdays.  In my mind, Saturdays were awesome and valuable because they were wide open.  Every Saturday represented a wide range of possibilities, unencumbered by the expectations and restrictions of the work week.  For me, the best way to honor the value of a Saturday was to keep it free from anything even hinting of a plan, an expectation, or an obligation.  My wife also saw Saturdays as highly valuable, but her approach to honoring them was to decide ahead of time how best to invest such a great resource.  In other words, she wanted a plan.  She wanted to organize Saturday so we could make the most of it.  She would ask me on Thursday or Friday what I wanted to do on Saturday and I would respond with “Nothing.”  That wasn’t accurate.  I wanted to do something on Saturday, I just didn’t want to plan on doing anything.  For me, a plan spoiled Saturday.  For her, Saturday would wither into nothingness without a good plan because the option of “doing anything” was a recipe for doing nothing.

We addressed our conflict creatively.  She would plan some options for the weekend and keep them to herself.  Then on Saturday morning she would let me in on the plan, which felt spontaneous to me.

The Perceiver/Judger attitude is a powerful personality pull that we need to consider when we work with coaching clients.  First, consider your own preference.  My tendency (as a strong Perceiver) to keep things fluid and open means I have a tendency to neglect procedures and systems.  For example, I put less emphasis on ironing out clear contracts and agreements, I sometimes neglect to schedule follow up sessions immediately, and I might forget to take action on a commitment I made in the coaching session.  I also am very open to flexing to where the client wants to focus, can work with a wide range of clients, and have a natural curiosity on pretty much any coaching topic.  I also struggle to end the sessions on time.

A coach with a preference for Judging will face different dynamics.  Their tendency will be to create and use systems and processes effectively, but they might avoid improving their system for fear of reinventing the wheel.  They might come across more rigid to their clients and less willing to flex on things such as time, contractual commitments, and best practices.  They can also tend to treat ICF competencies as the law of the land, failing to reach a level of mastery that knows when to bend or break the rules.

When it comes to our clients, here are three quick things to keep in mind when working with Perceivers:

What about coaching Judgers?  Here are four best practices for coaching them well:

We could probably write an entire book on this topic, but hopefully this handful of approaches to Perceivers and Judgers will give you a boost in being the best coach possible for your clients.  One more thing to keep in mind: your Perceiving/Judging preference will make you more/less comfortable with exploring options/making decisions.  If you’re not self-aware and determined to self-manage, your preferences will steer the conversation toward what’s more comfortable for you rather than what’s needed.  Remember, personality is not a prison or a problem, it’s just a set of preferences that can benefit and sometimes hinder our effectiveness in life.  Your clients are not trapped or in trouble because of their personality, and neither are you.  However, we can be more effective the more we are aware of our tendencies and the more intentional we are in overcoming our tendencies when necessary.