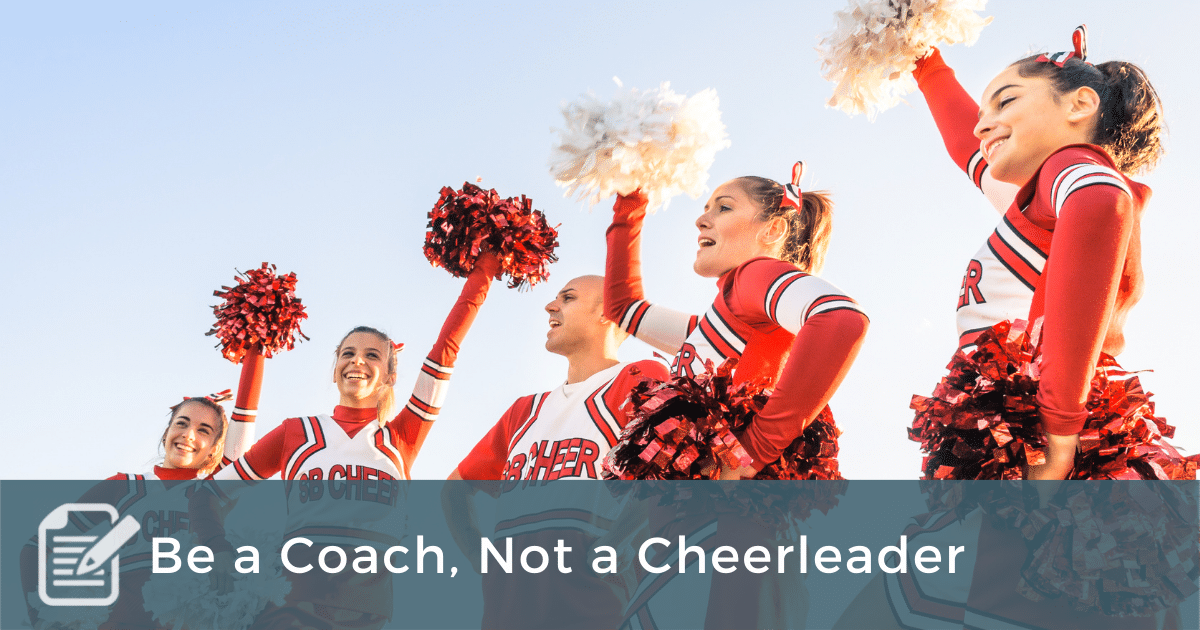 My high school football team was not very good.  They averaged one win per season, and the rare win usually came against a much smaller school.  However, to listen to the cheerleaders, you would have thought our team was championship caliber.   The cringe-worthy play on the field rarely altered the exuberance and positivity from the cheerleading squad.  With cheer after cheer, they extoled the football team’s power, talent, and certain victory – no matter the ugliness on the field or on the scoreboard.

As coaches, we want to be careful NOT to be cheerleaders.

The International Coach Federation has identified a set of markers for professional coaches. One such marker is worded in such a way that a coach might misinterpret it as an encouragement to be a cheerleader: Coach celebrates the client’s progress and learning.  Let’s unpack this marker a bit so we can do it well in our coaching and avoid being cheerleaders for our clients.

Coaches also celebrate the client’s progress and learning because our mission is to increase progress and learning.  That’s what we’re here for!  Although we don’t want to make it all about us, the fact that a client makes progress and increases learning is a signal to us that we are doing what we set out to do.  We are partners with our clients, so we share in their celebration.

Third, what does it mean to celebrate?  Celebrating is about noticing a good thing that has happened or is happening.  And this brings us back to the point about NOT being a cheerleader.  The problem with cheerleading is that it is disconnected from reality.  As I sometimes say to my clients, “I am not here to blow sunshine at you.”  Sometimes I say it more crudely.

Coaches tend to be encouragers and so it’s tempting to succumb to a terrible mind virus that goes something like this: “If a person stays positive and has plenty of self-esteem, they’ll be successful.”  In other words, self-esteem precedes performance.  Not only is this not true (the best source of self-esteem is to accomplish something of value), but it is also subtly manipulative.  And clients see right through the charade.

Clients are like grade school students who are not fooled by a syrupy teacher’s cheerleader methods: “You’re going to do great on the test tomorrow because you all are so prepared and so wonderful.”  My kids always hated that kind of message.  They knew the time to celebrate was after the test had been nailed, not before it and not as a way to pump them up in order to pass the test.

The best way to celebrate your client’s progress and learning is to pay attention and then to draw their attention to that which is celebration worthy.  I have a client who is working on being less emotional with her leadership team. She’s recognized that when she shows heated frustration, the team reacts to her frustration more so than to the issue at hand.  During one of our coaching sessions, she described to me a recent exchange she had with two of her team members.  As she recounted the conversation, I noticed how her level of frustration was much lower than normal.  After a bit of inquiry, I offered a celebration: “In the past few months, you’ve been talking about how you want to control your emotions instead of being controlled by them.  I just want to say, ‘Way to go.’  In the past, that conversation with your team would have been much more heated, but you just described a version of you that was much cooler and it sounds like you got way better results.  Great job!”

Notice there was no cheerleading in this example.  The celebration reflected reality.  She had made real progress, which was worthy of celebration.  Had I offered a “Way to go!” when she had not actually improved, the words would have been insincere, manipulative, and even counterproductive.

Also, notice in the example, my client didn’t meet my expectations – she met her own expectations.  As the coach, I’m not the one telling the client what progress or success looks like.  Instead, it’s my job to notice when the client progresses according to her own standards and desires.