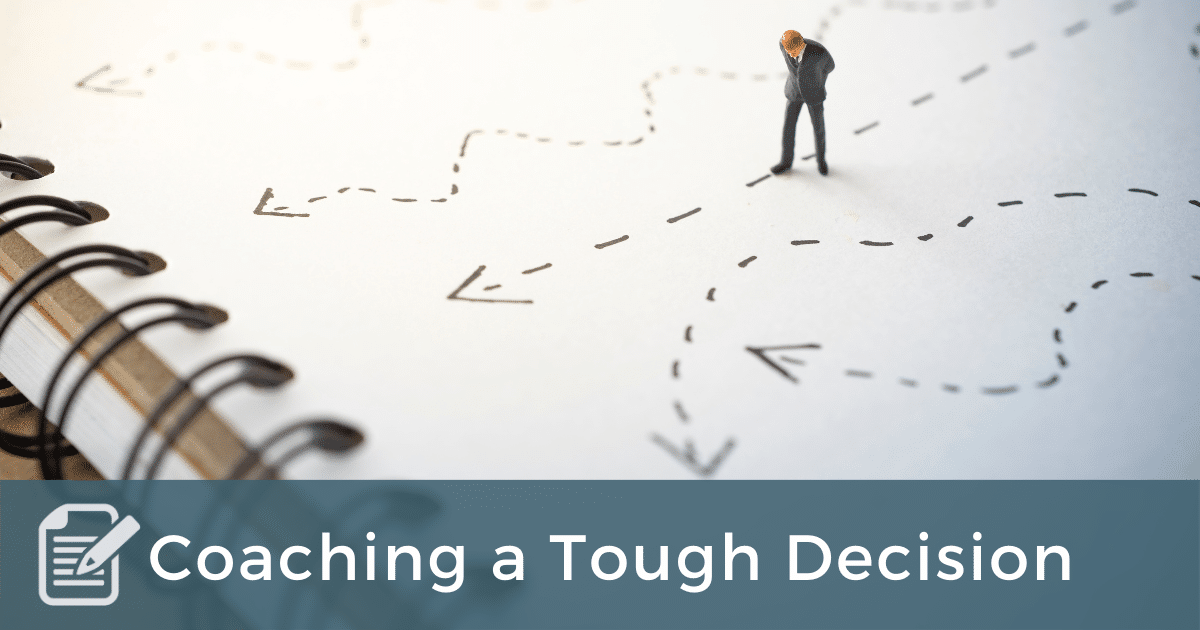 At the beginning of the session, my client told me she had a tough decision to make. Her decision would decide the course of her life going forward. She had begun to head down a certain road, knowing that the journey might be difficult, and now she was experiencing the difficulty. I was fixated on the difficulties. I should have been focused on my client.

The coach’s exploration should not immediately be about the problems. The real question is “Where is the client in this process?” To simplify, there are three stages to processing a tough decision.

Two things I’ve learned from experience. First, coaches usually assume the client is in the first or second stage. Second, the client is often in the third stage and doesn’t know it yet. Another word for this is predicament, which means a difficult, unpleasant, or embarrassing situation.

My client, at least unconsciously, knew she was going to have to end her journey. This meant dealing with failure, and more than that, the loss of a dream. And as the coach, I was the first person she encountered after realizing it. The coach needs to be able to fully support the client during times like these.

So how do you avoid going the wrong direction with the client’s topic? The coach could evoke awareness around this topic in many ways:

I remember saying to my client, “It sounds like you’ve already decided.” She wasn’t convinced she had. I gave her a challenge: “If you had to make the decision right now, and I won’t hold you to it, what would you decide?” She instantly told me her decision. We sat in silence for a few minutes while she let it sink in. She didn’t need me to help her weigh through the obstacles. She needed a safe environment to examine the impact of her decision.

Coaches need to extend their maybe capacity. This is the ability to not get too attached to our client’s topic or to our own interpretation. My client didn’t want me to help her fix her problem. She wanted me to support her while she externalized a heart wrenching decision. The actions we built helped her to emerge from difficulty and into the next phase of her journey.