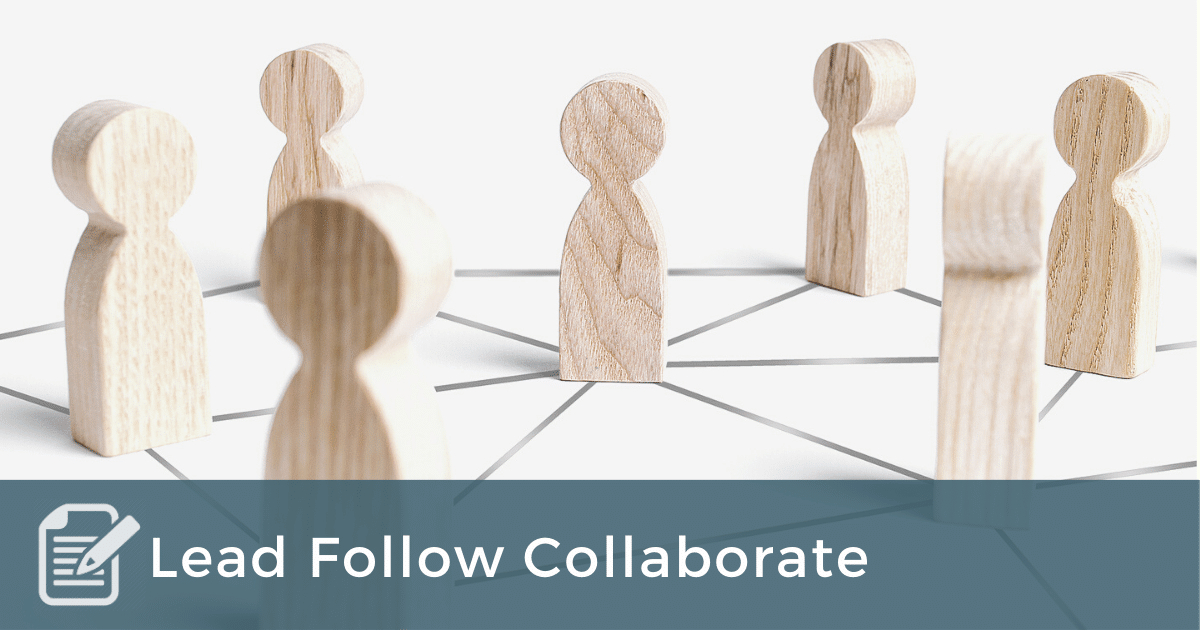 Many of our readers coach clients who serve within organizations such as businesses or churches.  In these settings, I’ve noticed three roles that can be helpful to explore with clients.  Broadly speaking, there are three ways one can engage others when it comes to making and carrying out decisions: lead, collaborate, and follow.

Each of these roles is valuable and necessary in given situations, and a person’s maturity and ability to manage their own presence determines how well he or she can occupy the role appropriate to a given situation.

Unfortunately, some people get stuck in one of these roles.  For example, some “leaders” are so used to leading that they struggle to NOT lead.  I once coached a leader who was strong at work and was accustomed to being the decision-maker in pretty much any situation.  Indeed, this was a true strength.  The problem was that every day he drove home where he was not surrounded by followers.  His wife was his collaborator, not his follower.  She didn’t exist to carry out his brilliant ideas.  Truth was, his inability to collaborate (or follow) not only hurt his homelife, it also kept a lid on the leadership development of others in his business.  He had a company of many followers and one leader (him).

Other people self-quarantine in the follower role, staying stuck there even though opportunity and other people are drawing them to collaborate and lead.  Several years ago, I had a client who epitomized the phrase “play small.”  He had served well in the second chair within a larger church before accepting the call to be the senior pastor in a different church.  He struggled in his new role because he was continually looking to be told what to do.  He was eager to follow, ready to roll up his sleeves and get to work if only someone would point him in the right direction.  He looked to the church deacons, the personnel committee, and a handful of key lay leaders for direction.  Of course, they were all looking to him for direction.  Fortunately, the church was patient during the year and a half it took him to recognize his need for growth and to step beyond the follower role and into the leader role.

I’ve noticed that some people default to collaborator (I’m one such person), while others default to the leader-follower binary and find it challenging to collaborate.  Collaboration can be tricky because the lines are fuzzy and there is not a clear chain of command, so to speak.  Sometimes it’s tough to know how to participate in a collaborative manner.

For those who default to collaborating, it can be tough to participate in a setting that is primarily leader-follower and leaves little room for collaboration.  This is true whether the default collaborator is called on to lead or to follow.  Collaborators not only want their voice to be heard, but they also want to draw out the voices of others and get plenty of input in the process.  Unfortunately for them, a collaborative process is not always the appropriate way to go in an organizational setting.

I’ve found it helpful to explore these three roles with individual and team coaching clients.  Most clients benefit from being more flexible across the three roles and by exercising intentionality about which role is most appropriate for them in a given situation.

One final thought: the coaching relationship is, by its nature, collaborative.  This means some clients will find working with a coach to be comfortable and natural.  This also means other clients will struggle with coaching as they try to engage the coach either as their leader (wrong!) or as their follower (wrong again!!).  It’s important to educate the client and help her or him know how to engage the coaching process for maximum value.