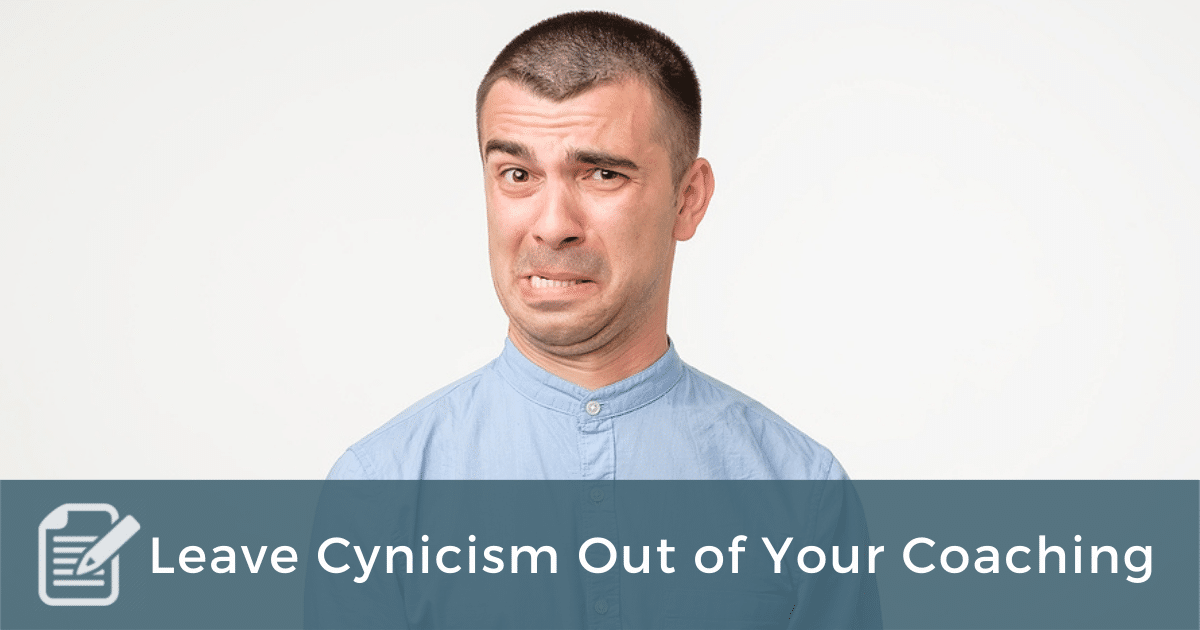 You are probably more cynical than you think. Cynicism is the belief that people only act out of their own self-interest. Of course, this is always true to some extent, but the cynic changes their behavior because they don’t believe people will show up at their best.

Cynicism is a nasty virus in North America today. It is easy to catch, and the only antidote is awareness. Let’s look at three ways cynicism can show up in your coaching and how you can leave cynicism out of your coaching conversations.

The client brings a topic with specific goals that must be achieved to get their desired outcome. When we ask the client where they are in the process, they fudge a bit. They speak optimistically. When asked, “How are you doing with this topic,” the client’s answer often is “Pretty good. There are areas I need to work on, but for what it is, I don’t think it’s too bad.”

I hear two common responses that coaches make to such a statement. One response is empathy. The coach responds, “That’s great. It’s not an easy goal to achieve. Any movement forward should be celebrated.” However, being too empathetic can hamper good coaching. At the beginning of the conversation, we should be listening more for the gaps than the movement to celebrate. The second response is cynical. The coach thinks, “Nobody likes to take too deep a look inside,” so the coach moves on without more exploration of the gap.

If you take out the empathy and cynicism, you might hear something different from the client. Rather than the “pretty good” statement being an attempt to avoid going deep, the client might be checking the relationship for the safety to go deep. “Is this a place where I can be real with who I am in achieving this significant goal?” The empathetic coach creates too safe an environment. No place for risk or challenge. The cynical coach doesn’t create a safe enough place for the client to do any self-discovery.

When the client answers “Pretty good,” I often make this statement: “’Pretty good’ often means I’m failing at many levels.” This is a reassurance that this is a safe place to self-reflect on the issue. We can talk about the “many levels” where we might find failure in our response to the issue. I don’t necessarily need to ask a deeper question; I just need to reassure the client they can respond deeper. Then, I get quiet and wait for the client to unpack the issue.

Cynical Thinking # 2: The Client Doesn’t Want to Hear Your Observation

Listening to the client, I hear something dissonant. One leader responding to why no one was stepping up for an important new position stated, “The 80/20 rule is as true in your church as it is in business.” The 80/20 rule states that 80% of the work is done by 20% of the people. It may have some truth to it, but it is also a gateway to cynicism.

As the coach, I’m thinking that Jesus is not going to allow the 80/20 rule in the fullness of His kingdom. But the client’s cynicism about the topic often makes the coach hold her tongue. I might think, “The client has already decided about the nature of people, so my observation may not be helpful to the conversation.” On the contrary, that is a cynical view of cynics.

Many coaches stop here. They make an observation internally but don’t think it is their place to tell the client. This is what separates good coaches from life-changing coaches. The life-changing coach delivers the observation without judgment but also without sugar-coating: “The 80/20 rule may just be your culture. You can change a culture.”

The non-cynical coach feels comfortable making such an observation. There is no judgment or competition. There is only challenge and discovery. It is the facilitation of a great conversation that encourages self-discovery at the deepest levels.

It is true that lots of clients don’t want to take action. They might prefer talking about raw ideas (I know I do). Confrontation might be required of the client, and they hate confrontation so they will avoid it as much as possible. The client may need to partner with others but always finds this takes more energy and time than just doing it themselves (at least at first). This is why people hire a coach – to push them farther than they can push themselves.

The cynical coach gets frustrated when the client won’t plan any action, and this is where a lot of coaching goes wrong. The coach either gives up on planning action, or the coach tries to force the planning of action. These are both cynical reactions. Giving up confers that the client doesn’t have the willpower to navigate through the issue. Forcing the action confers that the client doesn’t have the desire to navigate the issue.

There are lots of non-cynical questions a coach can ask at this point:

The client’s own cynicism needs to be challenged, and if we’re not careful, the client’s cynicism will infect our coaching. We will join them in believing there is not a great way forward on their issue.

Conan O’Brien had faithfully hosted The Late Show for 16 years in hopes of achieving his childhood dream of hosting The Tonight Show, following such iconic hosts as Jack Parr, Johnny Carson, and Jay Leno. After 9 months in the chair at The Tonight Show, the powers that be decided to put Jay Leno back in the late night time slot and push The Tonight Show to air after midnight.

O’Brien thought this sullied The Tonight Show and believed it was better to give the position back to Leno than to make The Tonight Show less than it was. Many people thought it was unfair and that Jay Leno was simply being selfish. This was a cynical view, though it might be accurate. Sometimes cynicism can be accurate.

But remember, cynicism is infectious. God bless Conan O’Brien. On his last episode of The Tonight Show, Conan pleaded with young people not to be cynical. “It’s my least favorite trait.” He added, “If you work really hard, and you’re kind, amazing things will happen.”

O’Brien directed his warning to young people, and I’m directing his warning to coaches. We can come to believe that nobody wants to do the hard work and that being kind is a waste of energy. It is not a waste. In fact, non-cynical coaching is the key to helping people move beyond their own self-interests and move the kingdom of God forward as well.