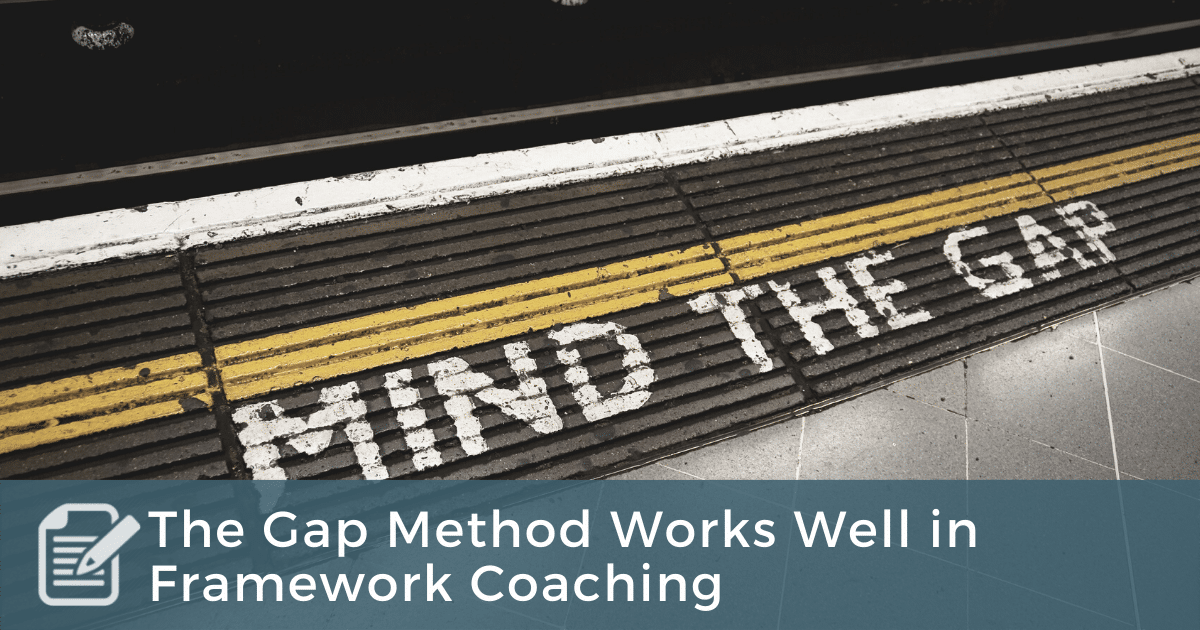 A major mistake a coach can make is agreeing on the topic too soon. At the beginning of a general coaching conversation, the client isn’t completely sure exactly what the topic is. A coach needs to spend time helping the client clarify exactly what the issue is. My analogy for this is the topic is an iceberg. At first, you only see the tip sticking out of the water but be assured there is more under the water than out. The client isn’t even aware of the depth of the topic until she does some uncovering with the coach.

This issue is slightly different when using a framework or formula. The topic may already be decided. Let’s take Dave Ramsey’s 7 Baby Steps formula for getting out of debt. Baby Step # 1 is Save $1,000 to your starter emergency fund. The topic is set. So instead of clarifying the topic, the coach should clarify the gap. Rather than explore the iceberg, perhaps a better analogy would be to explore the mountain pass. There is a path to the goal, but your client will have different mountains between here and there.

Let’s listen in to some imaginary coaching:

Coach: What’s the gap look like between where you are now with an emergency fund and the $1,000 that Dave recommends?

Coach: Sure. So it sounds like this will be a challenge for you?

Coach: I’d say that’s true for a lot of people. What do you think are a couple of reasons people don’t create an emergency fund?

Coach: Ok. What else?

Client: They spend too much money.

Coach: Alright. What else?

Client: They don’t see money from the big picture.

Coach: What do you mean?

Coach: That’s an interesting observation. If you took that one level deeper what would you find?

Coach: Wow. “Wants need a plan.” So now let’s take our own big picture of this gap between where you are now and having a $1,000 in the bank. How would you describe the gap?

Client: The gap is putting together a list of wants… and needs… and savings… and a plan for getting the money to the right place.

Client: My needs are pretty set, but my wants plan needs to allow for some money to go toward an emergency fund. I need a plan to put a certain amount aside each month.

To the coach, the client’s conclusion may sound obvious. The client may even finish with “Duh! That’s what Dave said.” But now, it is what the client said, and the client’s voice is much more powerful than Dave’s.

Once you Identify the Gap, it is time to Explore the Gap. The coach might ask, “What are the characteristics of a good plan for your money?” “What makes a plan foolproof for you?” “How can you best make adjustments on the fly?” “How can you become a person who is good with money?”

Once the client Explores the Gap, it is time to help the client Bridge the Gap. The coach might ask, “What’s the first thing you should do when you receive some money?” “What is another way to think about this money besides being your money?” “What is your plan to put some money in an emergency fund and keep it there?” “What could ensure this process?”

What we are trying to avoid within framework conversation is having the client spend too much (or any) time telling us about the past. We don’t need to know why they’ve failed in the past. It doesn’t matter to the coach. We don’t need to know how much they currently have saved up. By getting the client to identify the gap in framework or formula coaching, the client can see the obstacles between where they are and where they want to go. The coach should identify, explore, and bridge the gap.

PrevPreviousLeave Cynicism Out of Your Coaching
NextDo Coaches Ask Too Many Q’s? (Re-Post)Next