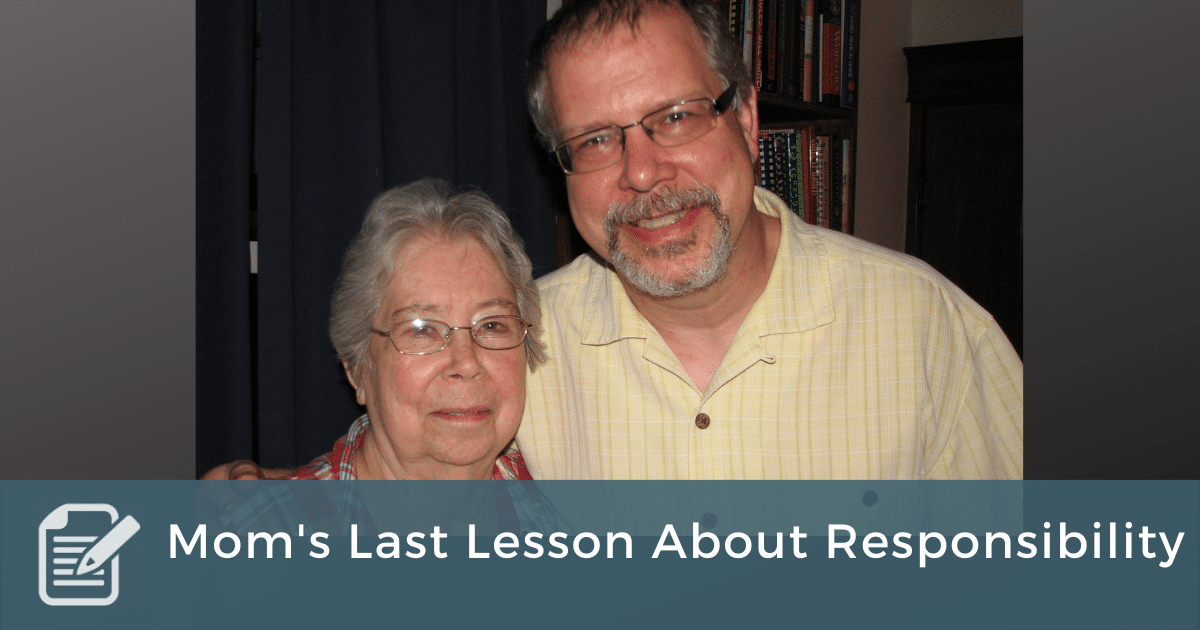 My mother was born in 1933, and her generation has a different mindset about doctors. It goes something like this: “If the doctor can’t guess what’s wrong with me, I’m not going to tell her.” I took her to the doctor because she wasn’t sleeping as well as she wanted. The doctor came into the patient room and asked, “How are you feeling today, Mrs. Miller?” In coaching terms, he asked, “What’s the topic for today?”

I started going with my mom to her doctor appointments to listen. There was often a lot of technical information, and as she aged, it was hard to remember all of it and engage in the technicalities of the conversation. As mom got older, there were a couple of hospitalizations. She moved into our house for more care, and I found myself taking more and more responsibility for her doctor’s visits. We wanted to protect her as much as possible. On the other hand, she wanted us to protect her just enough.

In the patient room, after her announcement of good heath for such an aged woman, I spoke up. I suspect you already know, but I was about to make a critical mistake. I told the doctor she wasn’t sleeping well, and that perhaps doubling her sleep aid might be a good (and safe) place to start. After a bit of back and forth between the doctor and me, he agreed to my excellent plan and rewrote the prescription to double the dose. Everybody won. I shortened the visit. Mom got great care. I believed all of this until we got home.

Walking in the door of our house, I summarized the doctor’s orders, just as a coach might summarize their session with a client. I said, “Remember to take two sleeping pills tonight until we get the new prescription filled.”

Maybe you already see the problem. I didn’t until she said, “Yeah, I’m not going to do that.”

I was frustrated. I must have expected this at some level. I asked, “What? We just talked to the doctor, and we all agreed this was the best course of action.”

“I didn’t agree,” she said without malice. She truly wasn’t frustrated or mad. She just hadn’t agreed, and based on the conversation between me and the doctor, she didn’t think she needed to take the extra dose.

My immediate thinking was that she didn’t fully understand the issue. The sleeping pills were not the kind that made you groggy. They worked in a different way that would not cause the kind of problems I suspected she was thinking. Rather than go into it, I simply asked, “Why didn’t you say something at the doctor’s office?”

My optimistic, encouraging, and supportive mother explained: “You were doing such a good job! I didn’t want to interrupt.” She meant it. She was in no way upset that I had acted the way I did. She even took some pride in my capability with such situations. However, she was not taking the extra pill. The issue was settled. I grumbled to her that this was irritating and that she should speak up when she doesn’t agree.

On the other hand, this was my fault. I did not take responsibility for her responsibility. I did not let her bring up the issue or explore the issue with the doctor. I came to the doctor with a great plan, my plan, but I didn’t even give the doctor the opportunity to help mom think this through. That’s his job as well, not mine.