Blog Post: The Price a Peacock Pays for Its Pretty Feathers 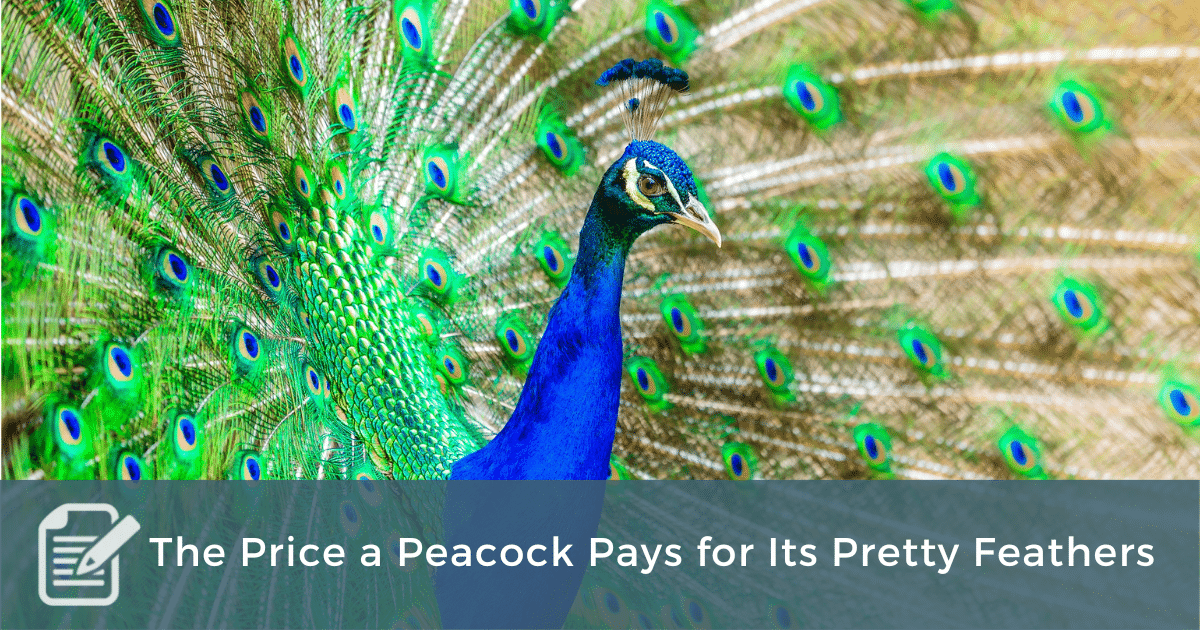 Everybody knows the peacock is proud of its tail feathers.  I had a friend as a child whose family had peacocks.  Lots of peacocks.  And all the males had the famous colorful tail feathers that they would often fan into full bloom and display with great pride.

The folks who study the evolutionary reason for things like peacock feathers describe them as a “handicap signal” or a reliable signal.  You see, the peacock’s feathers provide no evolutionary advantage – in fact, the opposite is true.  The feathers make the already conspicuous bird stand out even more to predators.  And if the peacock has to make a fight or flight decision, its bouquet of tailfeathers becomes a life-threatening liability.  The only purpose served by the costly tailfeathers is to signal to a potential mate that the peacock is worthy of their attention (and affection, if you know what I mean!).

The tailfeathers serve as a reliable signal because they come at a cost.  Unlike a mating call or a pretty dance, the tailfeathers reliably indicate mate worthiness.  They signal to the less flamboyant female peacocks that a particular male is healthy and strong enough to have survived despite the burden of beautiful tailfeathers.

So what does this tailfeather talk have to do with coaching?  Here’s my point: coaches would do well to know the reliable signals of coachability.

Another unreliable signal is a person’s degree of success or failure in life.  I know some coaches who take one of these conditions as a reliable signal.  On the one hand, a successful person is probably open to growing, striving, moving forward.  On the other hand, someone who’s far from successful might be eager to work with a coach and get some traction toward something better.  Nope.  Neither of these conditions can be trusted to indicate with certainty that someone is coachable.

A third unreliable signal is a person’s experience with coaching.  Just because someone has worked with a coach before or has been trained as a coach doesn’t mean they are coachable.  This is especially tough to admit when it comes to people who’ve been trained as coaches.  It would seem that someone who knows all about coaching, including how to coach, would be highly coachable.  But it’s not the case.

Okay, so what is a reliable signal?  What is the equivalent of the peacock’s feathers?  While not 100% reliable, one of the most reliable indicators is a person’s willingness to pay for coaching.

Literally, this is a costly signal.  And it’s for this reason that coaches should lean heavily away from coaching for free.

Caveat.  I’m not suggesting you should never coach someone for no cost.  There are exceptions to every rule.  But those are exceptions – not the rule or the best practice.  Okay, caveat over.

When a client is paying for the coaching, they value it much more highly than someone who is getting it for free.  And, generally speaking, the higher the cost, the greater the value.

In economics, pricing is a signal.  What people are willing to pay signals to the market that a product of service is valuable and that more is needed.  When people are less willing to buy, the price goes down, signaling that the service or product is in less demand.  The signaling works both ways.  A high price can signal to a producer to make more widgets.  It can also signal to consumers that these widgets are really valuable.

When coaching is free, it signals to both the coach and client that the coaching isn’t worth much.  Certainly, the client is paying with their time, but so is the coach.  What value should the client expect to gain as a result of the coaching relationship?  If the cost is nothing, the expected value is also very low.

On the other hand, if a client is paying a price for coaching, both parties receive the signal that the client expects to gain value from the coaching relationship.  And the client’s willing to pay a financial cost signals a higher likelihood they will also be willing to pay and invest in other ways: working hard, doing homework, following through on commitments, coming prepared, etc.

Getting the most from coaching doesn’t require a financial transaction, but it always requires paying a price.  After all, coaching is really a simple proposition that comes down to helping the client address three important questions:

3) How willing are you to pay the cost?

Costs are not always financial, but the client’s willingness to pay a financial cost is a reliable signal they are willing to do the necessary work to get the most from the coaching relationship.  And that (willingness to work) is practically an analog to coachability.

PrevPreviousIs There a Market for Life Coaching?
NextHow to Give Feedback to Your Fellow Coaches in CAM ClassesNext