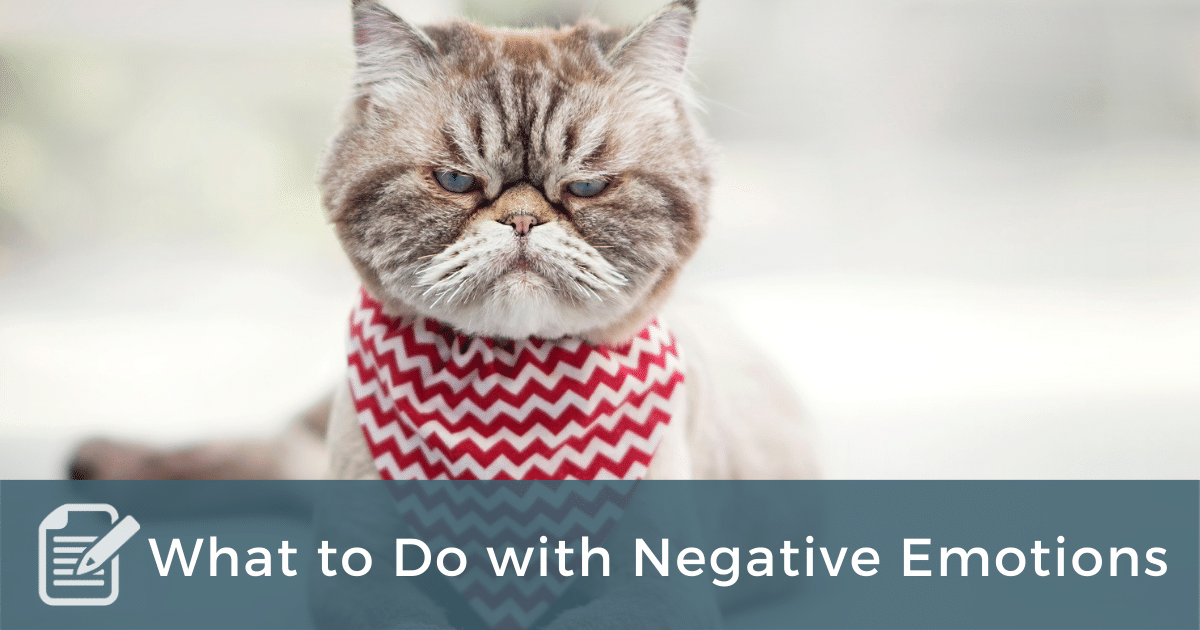 As a coach, I work with leaders and teams of leaders.  It might come as a surprise to know that many of my clients get tripped up by negative emotions.  That’s right; leaders and owners of successful businesses get distracted, deflated, and detoured by their own emotions.  Case in point: Arlen owns a small manufacturing company that is growing but also experiencing some growing pains.  The most painful of the pains stems from Arlen’s inability to deal effectively with his own negative emotions.  He gets frustrated, stays stressed, sometimes will cower in fear, and often delays important decisions because of anxiety.

Helping clients like Arlen isn’t therapy, it’s awareness and action – the two main outputs of a coaching relationship.  What do you do with negative emotions?  Five things.

First, you need to know what makes a negative emotion “negative.”  Simply put, an emotion is negative if you want less of it in your life.  That’s not the same as recognizing an emotion’s usefulness.  When you encounter a bear on your hike or hear a burglar in the night, fear is useful, but that doesn’t mean you want more fear in your life.

Second, you need to understand the function of negative emotions, which is to draw your attention to something that is a threat.  Negative emotions stir us to fight, flee, freeze, or spit – all of which are emotionally-driven instinctive behaviors aimed at dealing with a threat.  Negative emotions are dashboard indicators that something is wrong and we need to do something about it.  Anger stirs us to resolve an injustice.  Disgust compels us to spew spoiled milk into the sink instead of swallowing it.  Grief calls us to attend to a loss.  When we understand the function of negative emotions, we can more easily spot those times when a particular feeling is not serving us well.

Third, you need to respond to negative emotions appropriately.  If the emotion is spurred by an actual threat, then your response should be to deal with the threat.  However, rarely are our negative emotions connected to immediate threats of the bear and burglar types.  More often, these emotions come in response to unwelcomed circumstances such as a problematic employee.  For example, Arlen’s assistant plant manager has a habit of coming to work late, which frustrates Arlen.  In our coaching, it helped Arlen to admit that his frustration was a legit emotional response to unacceptable behavior.  He realized that his problem was two-fold: his employee was showing up late AND Arlen wasn’t doing anything about it.  The threat wasn’t so dramatic or crisis-inducing that Arlen felt the need to deal with it, but by not dealing with it, Arlen carried around the negative emotion for days and weeks.

Negative emotions are useful, but their usefulness has a short shelf life.  Dealing with the cause of the emotion is good, carrying the emotion around is not good.  Much of the stress that derails otherwise strong leaders stems from unresolved negative emotions.

Sometimes the best way to deal with a negative emotion is not by focusing on the external circumstance, but by focusing on your internal state of mind.  That is, the emotion isn’t caused by something happening to you, but by your perspective about what is happening.  This was the case with Amy, who runs a dental practice.  Like Arlen, she has a key employee who is often late to work.  Amy labeled the behavior as “disrespectful” and grew rather angry with the employee.  Honestly, if the employee was disrespecting the owner of the practice, anger might be warranted.  But Amy’s anger wasn’t warranted.  Her own inner fragility had led her to interpret the employee’s tardiness as a form of disrespect when, in truth, the behavior had nothing to do with Amy.  The best way for Amy to deal with the negative emotion was by identifying her own state of uneasiness that was making her prone to misinterpret other people’s behavior.

Don’t confuse the emotion of regret with remorse, which is an emotion that calls you to remedy a mess you’ve made.  Remorse might spur you to apologize or make amends, which is helpful.  On the other hand, regret spurs you to wish things had gone differently and misguides you to focus your emotional energy on the past, where you have zero influence.

Don’t confuse anxiety with preparedness.  Planning and preparing are not emotions, they are thoughtful actions we take in the now in order to be ready for the future.  Anxiety masquerades as preparing, but the negative emotion is felt now in useless anticipation of what might happen, or even what most certainly will happen, but which you cannot do anything about right now.  For example, you will die someday.  It’s good to have prepared a will and made some plans but worrying about missing out on this or that is misguided emotion.