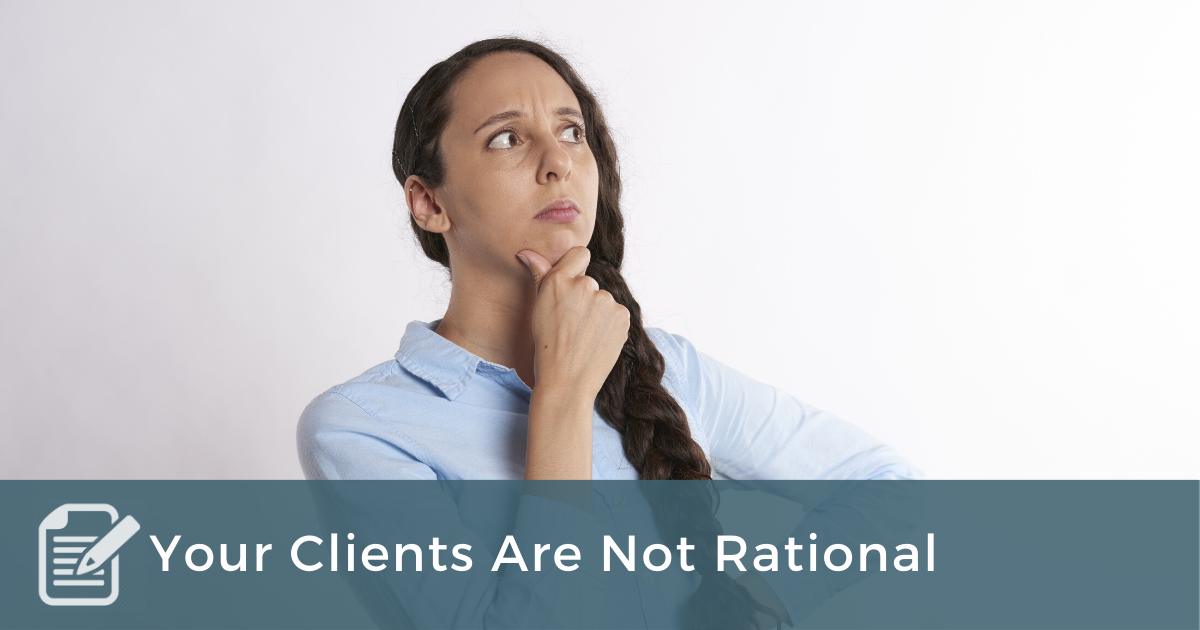 Much of what we do as coaches involves helping clients make decisions and then take action. Typically, the decision is some form of “What should I do about ___?” The coaching relationship creates a powerful space in which a client can consider an issue, really focus on the core concern of the issue, and then discern how best to address core concern. Easy, right? No, it’s not easy. And one of the most difficult aspects of coaching is the annoying trait of humans (including your clients) to not make rational decisions.

Humans tend to think we are more rational than we are. As social psychologists such as Jonathan Haidt have shown, people tend to think they make decisions by first gathering facts and then conducting a logical consideration of those facts in order to reach a sound decision. But that’s not really the case. Instead, people make decisions emotionally (following their intuition or “gut feeling”) and then search for logical reasons to back up their decision. The worst part is that we ignore facts that don’t support our decision.

I saw this decision-making dynamic play out a few years ago with a coaching client who owns a small business. At the time, his costs were outpacing his revenue by a long shot and the business was hemorrhaging money. The business is personnel-heavy and the only way to stop the financial bleeding was to let go of a staff member whom he’d hired just nine months earlier. The writing on the wall could not have been clearer or more compelling: my client needed to cut personnel costs and the specific person he needed to let go was the one he’d recently hired.

After a lengthy coaching session during which we explored the issue, considered the situation from a dozen different angles, and determined that the very life of the business was at stake, my client decided to give it one more month to see if things turned around. Logically, he needed to let the team member go. Emotionally, he simply was unwilling to do it.

As if auditioning for a lead role in Jonathan Haidt’s next book, my client assembled a list of “facts” that “proved” keeping the team member was the right and best thing to do. Letting him go would hurt the company’s reputation and employee morale. The man had a family to support and it wasn’t fair to bring him on board and then terminate him so quickly. There were some opportunities that might pan out for which they’d need the team member. And so on.

My client rationalized his decision to keep the team member, but the decision was anything but rational. And it was a bad decision, one that could very likely kill the business. In an effort to help him make the best decision possible, I pushed him to investigate and uncover the emotional instincts informing the decision. After a lot of soul searching and uncomfortable, challenging work, he finally spit out the truth: it was terribly embarrassing to admit that hiring the team member was the wrong decision in the first place.

My client’s emotionally charged desire to protect his ego nearly cost him his business.

As coaches, we serve our clients best by helping them make great decisions, even when doing so is difficult and when the right decision goes against their intuition. We do this by following three guiding principles:

Once my client realized he was protecting his own ego, he almost immediately gave up trying to do so, which reframed the issue and allowed new options to emerge. He decided to let the employee go in the fairest way possible and to explain the decision to the rest of the team. He also shared the news with key customers and stakeholders. In the end, his emotions didn’t make the decision for him, but they did help him carry out the decision with greater effectiveness.

PrevPreviousWhat To Do When Motivation is Low
NextDon’t Get HijackedNext